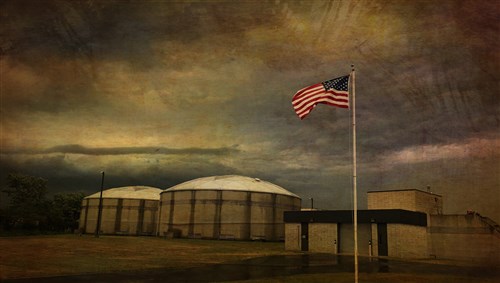 The treatment plant site covers more than 11 acres of land on the east edge of the City's corporate limits, north of Leggett Street.  The site has sufficient space to permit a future expansion of the plant to a peak flow of 4.4 MDG.

The sanitary sewer system of the City of Wauseon is a partially combined collection system, receiving both storm water and sanitary flows.  The wastewater from this system is conveyed to the wastewater treatment plant from the north end and from the south end of the system combining together at the head of the treatment plant and discharge into the screw pump influent well at the Influent Structure.  At this point the water is lifted by the screw pumps to a height sufficient to allow gravity flow through the primary treatment components.

Primary treatment is accomplished by a mechanical raw screen, an aerated grit removal tank and two parallel circular settling tanks.  This treatment phase removes settle-able solids, grit, sand, and floating materials.  The settled sludge from the primary tanks is pumped through the Sludge Pumping and Blower Building to the Primary Digester.

Nitrification is accomplished within the trickling filters as well as nitrifying bacteria oxidize ammonia from the wastewater.

The aeration channels are supplied with air from two blowers rated at 333 CFM each.  The fine bubble aeration system permits a suspended biological growth to occur which encourages flocculation of the fine suspended solids remaining in the trickling filter effluent.  This enhances settling in the final clarifiers.

Within the flocculation clarifiers the suspended biological material is removed through settling prior to discharge of the wastewater.  The settled sludge is rich and organisms that may facilitate continued breakdown of organic material.  A large portion of the settled sludge is returned to the influent of the aeration channels to sustain the suspended biological mass in the tanks.

The waste sludge is pumped to the primary clarifiers where it is co settled with the raw sludge then removed to the anaerobic Primary Digester. There it is stabilized to a non-offensive end product.  The sludge then runs through a dewatering press before it goes into a dumpster and is hauled to the landfill for disposal.

The major treatment processes are monitored and controlled by programmable logic controllers and a central computer.  Signals are generated by various system components that start and stop process equipment for an efficient treatment operation.  Further continuous monitoring is accomplished for an ongoing record of plant performance to serve as a means of improving treatment processes as well as generate data required in reports to regulatory agencies.